the pile is always bottomless 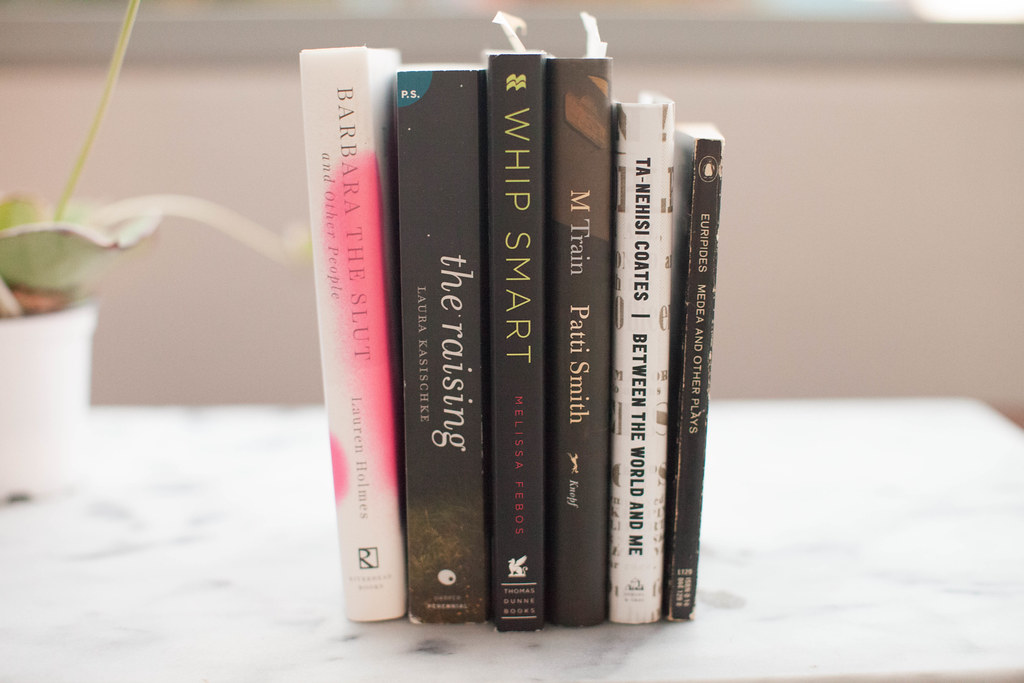 There will always be books to read. When I was younger there was a thrill in entering Waldenbooks. For hours, I’d get lost in the stacks or find a place in which to hide with my pile of books that I was already in the thick of reading. We didn’t have malls in Brooklyn–King’s Plaza–but nothing significant, and when my family moved to Long Island, malls awed me. They were gleaming and grand, and even though I couldn’t afford anything in the stores I’d still wander through them. They all had that new car smell. Sometimes I’d splurge on an Auntie Anne’s cinnamon sugar pretzel, slathered in hot butter or I’d feast on a Johnny Rockets cheeseburger back when I believed Johnny Rockets made a good burger. This was before the world. This was before context and seemingly endless choices. This was when Waldenbooks had the best books.

Back then I didn’t know what a “literary canon” meant. I didn’t know that there were writers you had to read or know. I read what interested me. I read Dostoyevsky alongside Pat Conroy and Alice Eliott Dark. I picked up Ann Beattie’s Where You’ll Find Me because the cover put me on pause. It was austere, bleached bone, and somber. I liked Flowers in the Attic and found Flowers for Algernon, and realized that maybe they weren’t so dissimilar. I read all of Ayn Rand until I realized that Ayn Rand was a bucket of crazy even if she knew how to tell a story. What I read was pretty much determined by my reaction to the first page of a book. If I didn’t like the first page or even the first sentence, why bother? I asked cashiers to recommend books based on ones I’d read and enjoyed. I read books mostly written by men because that’s what I read throughout high school and college. I was taught that men wrote the “big books”, the “great stories” while women wrote the quiet ones. It wasn’t until I was 24 and in the writing program at Columbia did I encounter bombastic, brilliant women. Joan Didion, Susan Sontag, Virginia Woolf (and no, I’d never read her work until graduate school), Gertrude Stein, Carole Maso, Maxine Hong Kingston, Toni Morrison, Mary Gaitskill, Grace Paley, Alice Munro, and I could go on. Until then I read books written by the dead, mostly, with some genre and sparse contemporary fiction for good measure. It’s hard to explain that there was a bliss in this ignorance, of not being aware of canon and the writers “one should read” (although now I think all of it is pretty much subjective bullshit, anyway).

Until then I read books written by the dead, mostly, with some genre and sparse contemporary fiction for good measure. It’s hard to explain that there was a bliss in this ignorance, of not being aware of canon and the writers “one should read” (although now I think all of it is pretty much subjective bullshit, anyway).  Until then I didn’t know the disdain that “literary fiction” writers had for genre fiction, the tension between the books that sold well and were reviewed well. I didn’t put too much stock in book reviews because I frequently disagreed with them. I liked books people didn’t like and hated ones people revered. I read what pleased me and it would take me well over a decade to undo the snobbery I had taken for truth. Now I read whatever satisfies me in the present moment and know that a book’s value lies in the way that it gives a certain kind of pleasure to the reader or how it transforms them in some unimaginable way. I read mostly to see the world through someone else’s prism, and I write to make sense of the world in which I exist, a world that is often wonderful, frightening and confusing. I read and write to see what could be done with language, how it could be architecture or surgery.

I’ve read 52 books this year, most of them written by women, many of them poetry collections and children’s books. I love the latter because both genres require a velocity and precision that’s demonstrably absent from other genres. A child has a short attention span so the work of a children’s book lies in both the economy and simplicity of language balanced by story movement and images that transport the child into an imaginative place. People who think children’s books are easy to write are fucking bonkers. I wouldn’t dare because I’d complicate the story in some way or use an image that would send a toddler to psychotherapy. I tend to look at safe objects and wonder how I can make them unsafe or unsettling–if that doesn’t happen on the page for me, I’m not interested in the characters or story. For beauty is nothing but the beginning of terror, which we can just barely endure, and we stare in awe of it as it coolly disdains to destroy us. Every angel is terrifying, Rilke writes in the first of the ten Duino Elegies.

George Saunders says that a real writer makes you feel uncomfortable, he’s kind of a freak. “Uncomfortable moments are not without value…because they make you feel luminous”. And I agree with that. The stories that have remained with me have made me feel unsettled, uncomfortable or uneasy in some way. I cleave to difficult, broken people. I like writing and reading about them.

I’m not blog-famous, and that’s okay. I don’t have a literary community and haven’t found these communities to be particularly inclusive and supportive though I dare say they would say they are all the way to the grave. I find most best-of book lists to be ridiculous because best is merely a subjective reflection of one’s taste and cultural access (or lack thereof). So I think about next year, what I’ll read and write, and I have an urge to re-read the Classics because no one does tragedy and pillaging better than the Ancient Romans and Greeks. I want to read stories that wouldn’t easily slip into my purview (meaning, I have to do the work in finding works in translation, works from POC, those not aligning with a binary gender). I want to read more children’s books and poems because both give me great joy in moments of grave darkness.

In terms of writing, I want to create stories that straddle genres. I love the blurred lines between fiction and non-fiction and the fallibility of memory. I’ve become oddly curious about dark matter and neurology and not sure how that will factor in. I still like my broken, flawed women and will continue to champion dark stories and characters even when the world tells me that they won’t sell, no one will read them. Next year I’d like to collaborate with a visual artist in some way, get better at taking pictures, and allow for different, varied voices in my work. Moreso than I’ve been writing as of late.

Sometimes I think back to those days in the mall, on the floor of Waldenbooks. I think about how much I didn’t know, and even though much has filled the space between that girl then and that woman now, there’s still so much to learn. There’s always so much to know in the brief time we’re able to know it. So this is the work. Always be the student and never posture as a pure teacher.

2 Comments on “the pile is always bottomless”

Error: Twitter did not respond. Please wait a few minutes and refresh this page.